The ‘Never been feta’ burger, aka The ‘Foot-Feta-ish’ burger from ‘The Bob’s Burgers burger book: Real recipes for joke burgers’

By Loren Bouchard and the writers of Bob’s Burgers. Recipes by Cole Bowden.

My well used copy of the book.

Note: This is not a vegetarian dish. The original recipe that I wanted do for this next post was indeed, vegetarian, but I’m having difficulty making that recipe work for some reason, so hopefully next time.

Note part two: I’ve made this burger more times then I can count, and while I will present it as and strongly encourage making it as written the first time you make it, there’s a couple of things I want to suggest to make it more… burger-y. First, ALWAYS toast your buns. Burgers, if made right, are delightful pucks of juicy meat and toasted buns make sure the buns don’t absorb any of that juice and become soggy (this isn’t limited to this specific burger, you should always do this). First and a half: Burgers are best cooked on a pan. Sure, grilling burgers is a ritual that is ingrained into our culture but cooking burgers in a pan makes the burgers retain more juice then cooking them on a grill. Second, have more feta on hand then the 4oz. You’re going to put some in the burger and pile some on top, and 4oz only goes so far. Third, do not skimp on or substitute some other green leaf veggie for the arugula. Arugula is a jack of all trades of the green veg world. It has a peppery taste to it, has a not to overbearing crunch, and isn’t full of water like some other greens. All of those elements come into play here. Bonus tip: use Kewpie mayo for the…mayo. Japanese mayo is made different and creamier, and it creates a velvety element to the sauce.

First we want to make our patties, since this is going to be the most labor intensive step in this process. In a bowl, mix 3/4 cup of the feta cheese with the beef until it’s well incorporated, then form 4 patties. It honestly doesn’t matter how you make them as long as they are patty shaped and slightly bigger then your buns (unless you’re like me and couldn’t find ciabatta rolls so you had to use kaiser rolls). Normally I form my meat pucks with my hand but this time I decided to try this burger shaping tool someone got me sometime ago that I just found out I had, so yours may not look like mine. 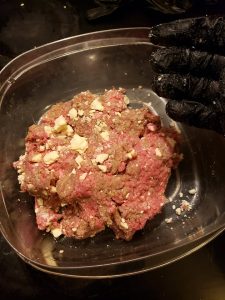 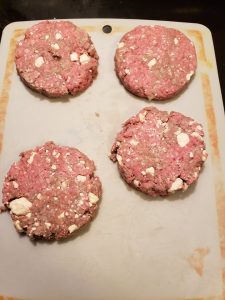 Season the patties with a bit of salt and pepper and throw in the pan for 5 to 7 minutes per side and bare in mind with the cheese in the meat, this is going to be a bit messy. When the burger is done, put a thermometer in the side of it all the way to the center and we’re looking for a temp that is 160 F. If we’re not there, toss it back on for 1 minute per side until we get to that temp. When we get there, toss them on a plate to rest for a minute or two, this helps the juices redistribute. 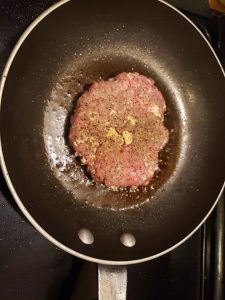 While the cooking commences, mix the mustard and the mayo into a sauce. Sriracha is completely optional here, putting in as much as you like, and I typically will make a batch without some for my kids, then make a small batch with the sriracha for me and my wife. 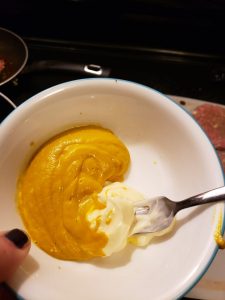 While the patties rest, toast your buns…the burger buns. I strongly encourage spreading some butter or mayo on the buns then putting them on a pan instead of using the oven or toaster. You’d have to keep an eye on it sure, but you’ll get a good crust on it. 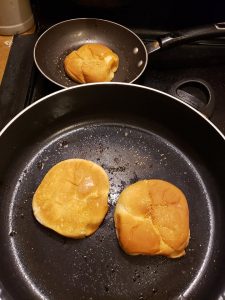 Time to build the burger: Bottom bun, good handful of arugula, the burger, a nice and heavy helping of feta on top, and finally spread the sauce on the top bun and boom. You have a bob’s burger. 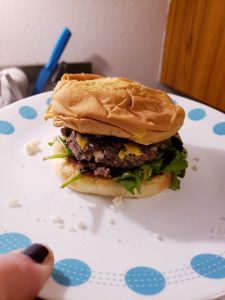 While the picture above may look like a squished mess, bare in mind that ciabatta rolls are crusty and more sturdy than kaiser rolls which, again, is what I had to use as I couldn’t find any ciabatta. It definetly is better with ciabatta. There’s a reason this is my favorite burger, besides it being the first one from this book that I’ve made. It’s juicy and cheesy and the taste of the cheese mixes so well with the peppery crunch of the arugula, and the sauce hits at the end in such a way that is hard to describe. If there was ever a recipe that we’ve posted that I hope you try, it’s this one. If ou do, I hope you enjoy it just as much as I do.

Until next time
-Warren