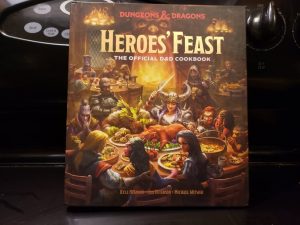 Every one us has that one thing that influenced their fandom growing up. For me, as a D&D/fantasy nerd, it was two fold in the form of Frank Frazatta’s Death Dealer paintings (and the book based on them) and the first D&D book I ever read: Dragonlance’s Flint the King. It’s the latter that we’re working with today, as in the Hero’s Feast cook book there is a porridge recipe created by the ridiculously silly Gully Dwarves, who mistake the protagonist, Flint, for their king.

Now, I wanted to try to switch things up and post a recipe from another cook book here but with the Olympian forecast looking snowy, a good hearty morning meal is in order and this is a good one that changed how I make oatmeal for my family.

A Note: One thing I try to do with any recipe is try to figure a way to make it for those who don’t share the same dietary constraints that I do. That being said, the way presented is the only way that I have made this porridge, so I won’t be putting any alternative ingredients. The recipe, however, is one that is pretty simple and plain that can be altered in anyway that suites your needs.

Here are the ingredients you’ll need. 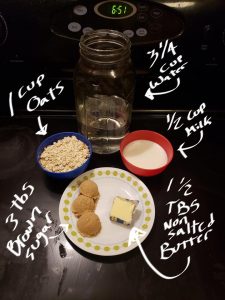 The first thing we want to do is a bit counter intuitive in that we’re going to melt our butter and cook the oats, stirring for roughly 4-5 minutes, until the oats have a nice toasted nutty smell and is a shade darker. This is the first thing this book taught me to do different in my life, because toasted oats brings something insane to oatmeal. 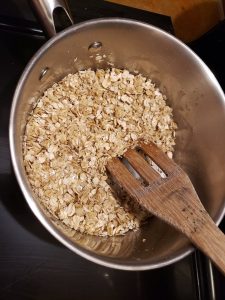 After you have met perfect toasted oat bliss increase the heat to medium-high and add the water and bring it to a simmer, stirring constantly. Once you get to a simmer, lower the heat to med-low, add the milk, and simmer again stirring occasionally for around 15 minutes. We want this to thicken up a bit to resemble an applesauce like texture. 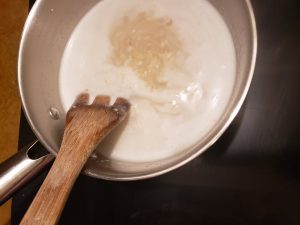 Once we hit the sweet spot, stir in the salt and 3 tablespoons of brown sugar, covering and removing from the heat. Now, we’re almost done, but just like a suspicious treasure chest hanging out in the open DON’T TOUCH IT. We want the oatmeal to sit for a good 5-6 minutes to thicken to the consistency of pudding, and it could be a mimic. 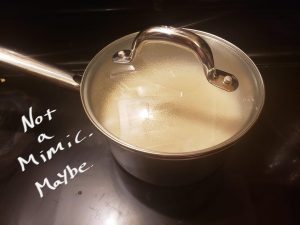 At this point you’re ready to serve! This is where customization comes into play as while you could just throw a sprinkling of brown sugar and some cream in the mix, you can also add other fun oatmeal toppings. My favorite is honey and apple pieces but Blueberries and Greek yogurt is good too (just don’t add too much of the yogurt). Regardless how you doctor it up, this is a great way to start a cold winter day, and warm up those bones. 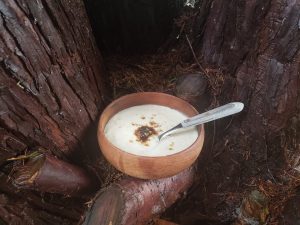 I hope you give this a try, next time we’ll make an onion rich side dish, so stay tuned!