Meat on the Bone from One Piece: pirate recipes by Sanji

One of the most well known and prolific manga/anime properties is the weird swashbuckling epic One Piece, with it’s lovable cast, and fruit that gives super powers. In it we follow the eccentric and strange Straw Hat pirates led by their fearless, stretchy, and absent minded captain Luffy as they search for a legendary treasure. Now, this isn’t a review for One Piece mind you, but I don’t want to go into the this without giving some context because this is one of the weirdest recipe I’ve ever followed.  The recipe is Captain Luffy’s favorite food, the aptly named ‘Meat on the bone’ made by the ship’s chef Sanji in the the One Piece: Pirate recipes by Sanji book that was recently brought to the U.S last year. 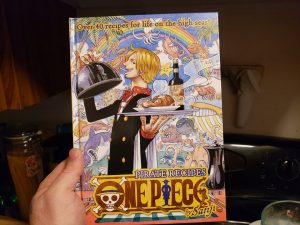 Note: This is definitely not a vegan/vegetarian friendly recipe.

Scotch mix
18 oz (a little over a lb) of ground chicken
1 tsp salt
1 egg, not cooked in any way
A little black pepper

The first step is possibly the most complicated, in that we need to make what the book calls ‘chicken drumstick tulips’. We’re basically going to use a sharp knife (or kitchen scissors if you have them and think to actually use them) to cut the meat loose at the handle end of the drumstick and roll the meat down the bone until it’s inside out on the other end. This is extremely tedious, but if you make a cut along the meat, and remove the tendons, it’s a little less so. 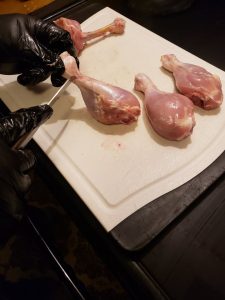 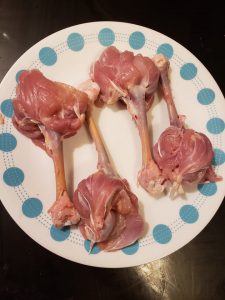 To make the outer meat coating you want to take the bread crumbs and soak them in the milk, mixing very lightly to combine (it really won’t take long to combine), until it looks like mush. This will act as a binder of sorts with the uncooked egg as we knead the ground chicken, salt and pepper together with more breadcrumbs until it’s a kind of thick paste consistency. This is a very basic Scotch mix. 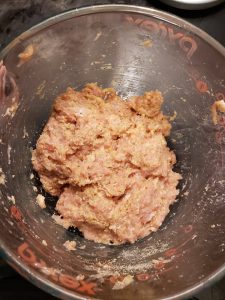 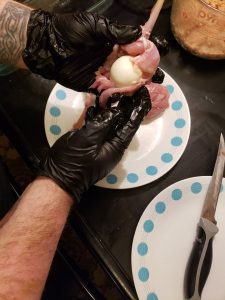 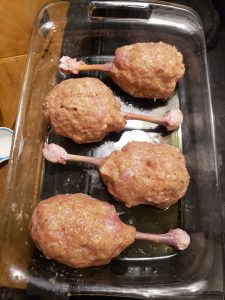 And finally, put in a pan and stick in oven for 15-20 minutes until it looks kind of like a dark golden brown. 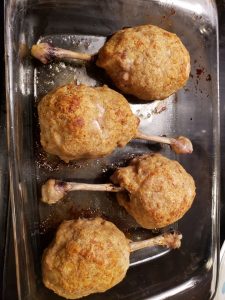 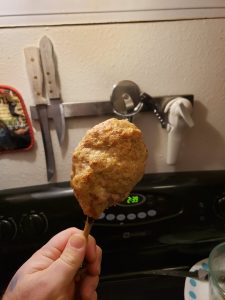 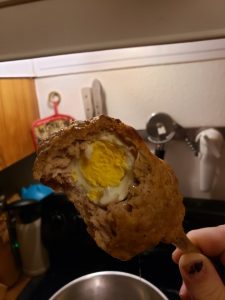 I’m not kidding when I say this is one of the weirdest recipes I’ve made (and I’ve made jellied cod…). I was initially worried I wouldn’t like it but I’m happy to say that it’s a surprise for sure. The ground chicken and the drumstick are near impossible to differentiate (go figure) and the egg adds a wild bit of creamy texture that you don’t expect. Next time I make this, however, I’m going to add more spice to the scotch mix. I always try to follow the recipe as it is written the first time I make it and as written, it’s kind of bland. Now, this could be from a number of reasons, but the long short of it is to me it needed something more akin to a scotch egg (which this basically is). It would do good with more salt and pepper or even a bit of garlic, something to add some aromatic flair, as scent is part of the eating experience. Either way, this is definitely something I’m making again and would suggest this to anyone regardless if they like the fandom or not.